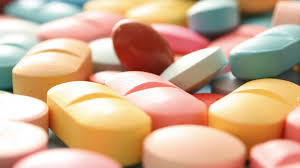 Aceclofenac & Thiocolchocoside Tablet
Price And Quantity
Product Specifications
Product Description
Aceclofenac is an orally administered phenylacetic acid derivative with effects on a variety of inflammatory mediators. It is from the class of non-steroidal anti-inflammatory drug (NSAID), related to diclofenac. Through its analgesic and anti-inflammatory properties, aceclofenac provides symptomatic relief in a variety of painful conditions.
Thiocolchicoside, a semi-synthetic derivative of the naturally occurring compound colchicoside with a relaxant effect on skeletal muscle, has been found to displace both [3H]gamma-amino butyric acid ([3H]GABA) and [3H]strychnine binding, suggesting an interaction with both GABA and strychnine-sensitive glycine receptors.

Product Description:
Thiocolchicoside, a semi-synthetic derivative of the naturally occurring compound colchicoside and is a muscle relaxant agent with anti-inflammatory and analgesic actions, also is used topically for the treatment of muscular spasms and for rheumatologic, orthopedic, and traumatologic disorders and has been found to displace both [3H] gamma-amino butyric acid ([3H] GABA) and [3H] strychnine binding, suggesting an interaction with both GABA and strychnine-sensitive glycine receptors. Aceclofenac belongs to a group of medicines called non-steroidal anti-inflammatory drugs (NSAIDs) and of phenyl acetic acid derivative with effects on a variety of inflammatory mediators. It works by blocking the action of a substance in the body called cyclo-oxygenase. Cyclo-oxygenase is involved in the production of various chemicals in the body, some of which are known as prostaglandins. Prostaglandins are produced in response to injury or certain diseases and would otherwise go on to cause pain, swelling and inflammation. Combination of proven NSAID Aceclofenac with an effective non sedating Muscle Relaxant Thiocolchicoside to treat painful muscle spasm.

Thiocolchicoside:
This compound has been shown to inhibit the binding of [3H] GABA (g-amino butyric acid) or [3H] strychnine of cerebrocortical or spinal cord membranes. [3H]TCC was also displaced in a concentration-dependent manner by GABA or by several agonists or antagonists of the type A receptor for GABA (GABAAR). TCC has been thought to act as a GABAAR agonist that induces depression of the central nervous system and, in turn, myorelaxation. Moreover, TCC possesses a molecular structure similar to that of colchicine, a plant alkaloid that binds to tubulin and induces the depolymerization of microtubules, disrupts axonal transport, and inhibits mitosis. Following oral administration, thiocolchicoside is well absorbed from the gastrointestinal tract. It shows its effect in 1-2 hours after oral administration and peak plasma level is achieved in about 0.7 hours and Elimination half-life is about 2.5-5 hours. Its effect is continued for 24 hours.

Adverse Effects:
The most common adverse reactions were somnolence, nasopharyngitis, fatigue, dry mouth and pharyngitis, and most were mild to moderate in intensity.

Contraindications:
â— Hypersensitivity to Thiocolchicoside or Aceclofenac or any component of the tablet.
â— In patients in whom substances with a similar action (e.g. aspirin, or other NSAIDs), precipitate attacks of asthma, bronchospasm, acute rhinitis or urticaria or patients are hypersensitive to these drugs.
â— Severe heart failure or severely impaired hepatic or renal organ function and during the last three months of pregnancy.

Drug Interactions:
Drug interactions associated with aceclofenac and thiocolchicoside are similar to those observed with other NSAIDs.
Aceclofenac may increase plasma concentrations of lithium, digoxin and methotrexate, increase the activity of anticoagulants, inhibit the activity of diuretics, enhance cyclosporin nephrotoxicity and precipitate convulsions when co-administered with quinolone antibiotics. Furthermore, hypo or hyperglycaemia may result from the concomitant administration of aceclofenac and antidiabetic drugs, although this is rare. The co-administration of aceclofenac with other NSAIDs or corticosteroids may result in increased frequency of side effects.
Trade Information
Related Products